Photos: Morning of 9112001 Before,During & After the Attack on the WTC
This Picture Tells More Than a Thousand Words
By Joe RIzza

In the aftermath of the events of 9/11, the World Trade Center’s Twin Towers gained more reverence than they had while they stood. Perhaps it’s because the victims of the attacks have come to personify the towers by sharing the same fate. Thus, it’s impossible now to look upon their image without sadness and a sense of loss. And yet, while they may be missed, the Twin Towers still stand tall in the memories of those who recall a time before 8:46 a.m. on September 11, 2001.

On that fateful morning, the towers highlighted the New York City, as they had for the prior three decades, with a late summer, blue sky provided a seemingly perfect background to accentuate their elegance and symmetry. For those going about their daily routines, there was no indication that life was about to change forever.

Constructed in the late 1960s and early 1970s, the majestic buildings may have once been strangers to lower Manhattan, but by 2001, the towers had become part of the fabric of the city. While it would have been difficult to imagine the skyline without its centerpieces, at one hundred ten stories each, the towers still had the ability to inspire awe. At least one New Yorker thought so.

During the previous three years, David Monderer had taken photographs around the city, but on this particular morning, he planned on photographing the city’s skyline from the recently opened pedestrian walkway on the south side of the Manhattan Bridge.

Carrying a new medium format camera and a tripod, Monderer had left his apartment in Washington Heights early that morning and headed for a downtown subway that would take him to the bridge, unaware that his opportunity to photograph the Twin Towers was growing short.

Emerging from the subway, Monderer found a brilliant and tranquil sky, a “Carolina Blue,” he said, alluding to his days as a student at Duke University. After proceeding across the bridge from Manhattan, his trek ended at the bridge’s eastern support, closer to the Brooklyn side, approximately one hundred forty feet above the river. There, he set up his tripod and camera, using a hole in the walkway’s fence for an unimpeded view of the skyline.

In the foreground was another historic landmark, the Brooklyn Bridge, but the Twin Towers dominated the frame, standing as proud symbols of the strength and resiliency with which New Yorkers could identify. Monderer focused the lens and clicked down on the camera’s shutter. It was approximately 8:30 a.m.

Although there is no way to be certain, Monderer may have taken the last photograph of the Twin Towers, before the world looked upon them in horror during a desperate struggle for survival.

After packing up his equipment, Monderer proceeded toward the Manhattan side of the bridge when he heard a loud crash. American Airlines Flight 11 had struck the upper floors of the North Tower, tearing into its north façade, as smoke billowed from the gash into the otherwise clear sky. The time was exactly 8:46 a.m. In less than two hours, at 10:28 a.m., the towers would be gone.

The photo Monderer took that morning now hangs in the National September 11 Memorial Museum at the site of the World Trade Center. Each day, thousands of visitors bear witness to a vast collection of photos and artifacts that preserve the history of 9/11. For every visitor, the journey back to September 11, 2001 starts down a passageway that eventually leads seventy feet below ground to the exact location from which the Twin Towers once began their climb.

Before becoming entrenched in events of that day, a glance to the right wall of the passageway reveals the photo of the New York City skyline as it appeared that morning. Like the other photos and artifacts in the museum, Monderer’s photo is strategically placed. Taken in the last moments before the Twin Towers were attacked, the photo marks the beginning of the story.

Monderer humbly wonders about its significance, pointing out that numerous photos of the Twin Towers were taken before they were brutally attacked. Indeed, the World Trade Center had been photographed countless times with pictures of the towers appearing in books and magazines and on postcards. But what distinguishes this photo of the skyline that morning from others is the time in which it was taken. Knowing what the next few minutes, hours, days and years would bring, perhaps one final glimpse of the towers allows viewers to remember a time since passed.

It is possible, and quite often the case, that those who gaze upon art may come away with different meanings. Likewise, a photograph that captures a moment in time may evoke a wide range of emotions. A photograph of the city skyline just before the Twin Towers were attacked can be difficult to look at without a feeling of foreboding grief. But perhaps such a photo can also make onlookers think of the stories of survival, sacrifice and the courage to move forward that have since emerged.

While lower Manhattan has since been rebuilt and pieces of the World Trade Center exist only as a relics of the past, Monderer’s photo brings the Twin Towers back and, with them, the comforting reminders of those who brought them to life.

David Monderer is a member of the Soho Photo Gallery, a cooperative gallery located at 15 White Street, New York, NY 10013.  He is the person with his tongue hanging out in the photo below, taken by a fellow photographer he met on 9/11.  It is taken from the east side of the Brooklyn Bridge on-ramp that still is over land.  A few minutes later after this shot was taken, the South Tower collapsed and he and the fellow photographer immediately turned back into Brooklyn, then back to the Manhattan Bridge to avoid the cloud of debris headed in their direction. 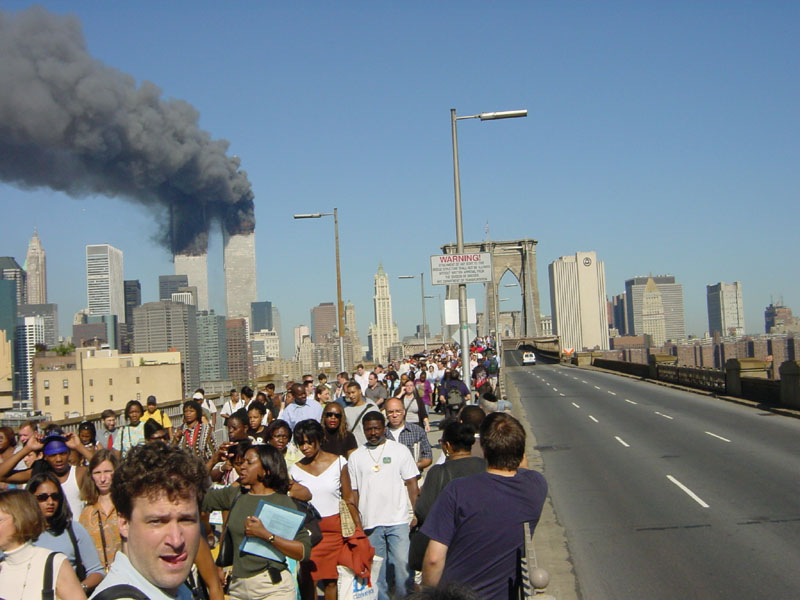